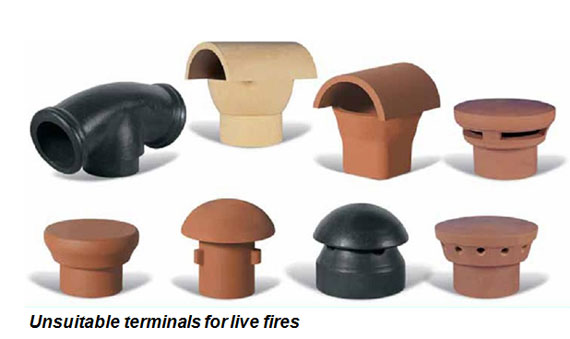 Chimney cowls: why the right cowl on a chimney can stop birds nesting

Keeping birds out is the best preventive measure for chimneys

Capping your chimney is a very important step in ensuring that you have a chimney which is functioning at its peak performance. The cowl which is used to cap your chimney is extremely important as well, especially when it comes to keeping out birds and other debris which can accumulate within the flume of the chimney.

Keep the birds away

Cowls come in a variety of shapes and sizes. Just because a cowl may look good, it may not have the functionality best suited for your chimney. For example: A cowl which has large holes may allow for smoke to flow easier from the chimney than one which has thinner slots, but the larger holes may allow for birds to enter the chimney and build a nest. A solution to this would be to have a cowl that has large opening but a screen around the openings to prevent birds from nesting in the chimney.

Cowls maintain the flow of smoke which deters birds from nesting

The purpose of a cowl is to keep debris from the roof as well as rain from entering the chimney. The cowl also disperses the smoke from the chimney. Having a chimney with the proper cowl as opposed to a chimney without a cap or cowl greatly reduces the probability that you will have any bird problems. For example, an open chimney has nothing that deters the bird, especially when there is not a fire in the chimney. For the bird this is just a large and secure open area in which to put a nest. On the other hand, a cowl blocks main opening. If screened properly a cowl makes it impossible for the bird to nest within the chimney. Because of the design, most cowls prevent bird nests from forming on the cowl as smoke/steam arises upwards and around the cap. A bird would be very uncomfortable nesting in such a spot.

Don’t go too large or too small

It is vitally important that you do not choose a cowl that is too large or too small in its openings. Having a professional assess your chimney and help you with the selection process will ensure that you have the cowl what gives your chimney the best protection while maximizing the functionality of the chimney. If the openings are too big then the cowl is not going to function properly. Apart from birds, rain and other materials can get clogged within the chimney. This is adverse to the functionality of a cowl. However, if the slots are too small, you may deter a bird from nesting only to have a smoke accumulation occur from not having enough egress for the smoke.

Like all elements of your chimney, a cowl should be properly cleaned and maintained. It is advised that you have a full chimney cleaning at least once a year. During the cleaning ensure that the cowl is thoroughly scrubbed of any built up tar and debris. Have your cleaner remove the cowl and clean the interior as well, as this is a common place for soot, tar, and debris to accumulate. Usually, a professional chimney cleaner will perform this task when conducting a power sweep or regular cleaning maintenance on your chimney.

If your cowl has visible damage, you are encouraged to stop using the chimney until a proper cowl has replaced the damaged cowl. Leaving a damaged cowl on your chimney may encourage birds to nest or cause a fire hazard.

We understand that your home is your most valuable possession. Ensure the safety of your home by minimizing the dangers that a nest in the chimney can bring. If you have any inquires as to which cowl would be appropriate for your home, or if you have any concerns about your existing cowl please feel free to contact us at SM Sweeps. We are more than happy to address any enquires about cowls or any other chimney cleaning service. We are here to help you.